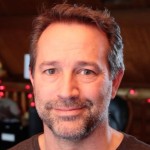 The one question that I have a hard time answering is, ”Where are you from?”
I have moved nearly 30 times in my life so far and I have lived and worked in several countries around the world.
I'm a self-taught animator and I began my career at age 17 and I'm still working at a furious pace 33 years later.

I spent the first 15 years of my career in traditional hand-drawn animation, working for some of the biggest studios in the world and drawing iconic characters like Aladdin, Goofy and Thumbelina.

I ran my own small animation studio in Ireland for 10 years before moving to Canada and entering the world of visual effects for film and television.

Although I have worked on a multitude of high profile films like District 9, A Goofy Movie and the Twilight Saga, when I'm asked what my proudest accomplishment is, I say (with a nerdy glint in my eye) that I have worked on all three of the Stargate series. There’s no better feeling than working on a show that you’re already a huge fan of!

I'm currently a College Professor of Animation at Okanagan College in Kelowna, BC and I was formerly the Supervising Animation Director at Bardel Entertainment’s Kelowna branch, helping guide the animation teams that make some of the world’s most popular tv shows like Rick and Morty, Teen Titans Go, Teenage Mutant Ninja Turtles and several shows for Dreamworks.

I has been writing “How To Animate” a series of 26 books on advanced animation techniques for over 19 years.
I am also a novelist, currently working on a fantasy series.